A Unique Resort with Unique Stories

From the arrival to the decoration of each one of the rooms, Andaz Costa Rica tells a story that reflects the local culture and its traditions.

One of the goals of the Andaz Brand is to create locally-inspired experiences and engage guests in the local culture in a comfortable, unique atmosphere.  Every single space in the resort is a reflection of our surroundings, art expressions or traditions.  We invite you to immerse yourself in our stories and get inspired by a journey of remembrances.

The resort is designed to blend into the landscape. The Guestroom Buildings only have 3 floors allowing structures to not interfere, not protruding. The materials used, such as Caña Brava and bamboo allows facades to achieve this integration, and natural materials help the animals to feel in their own habitat. 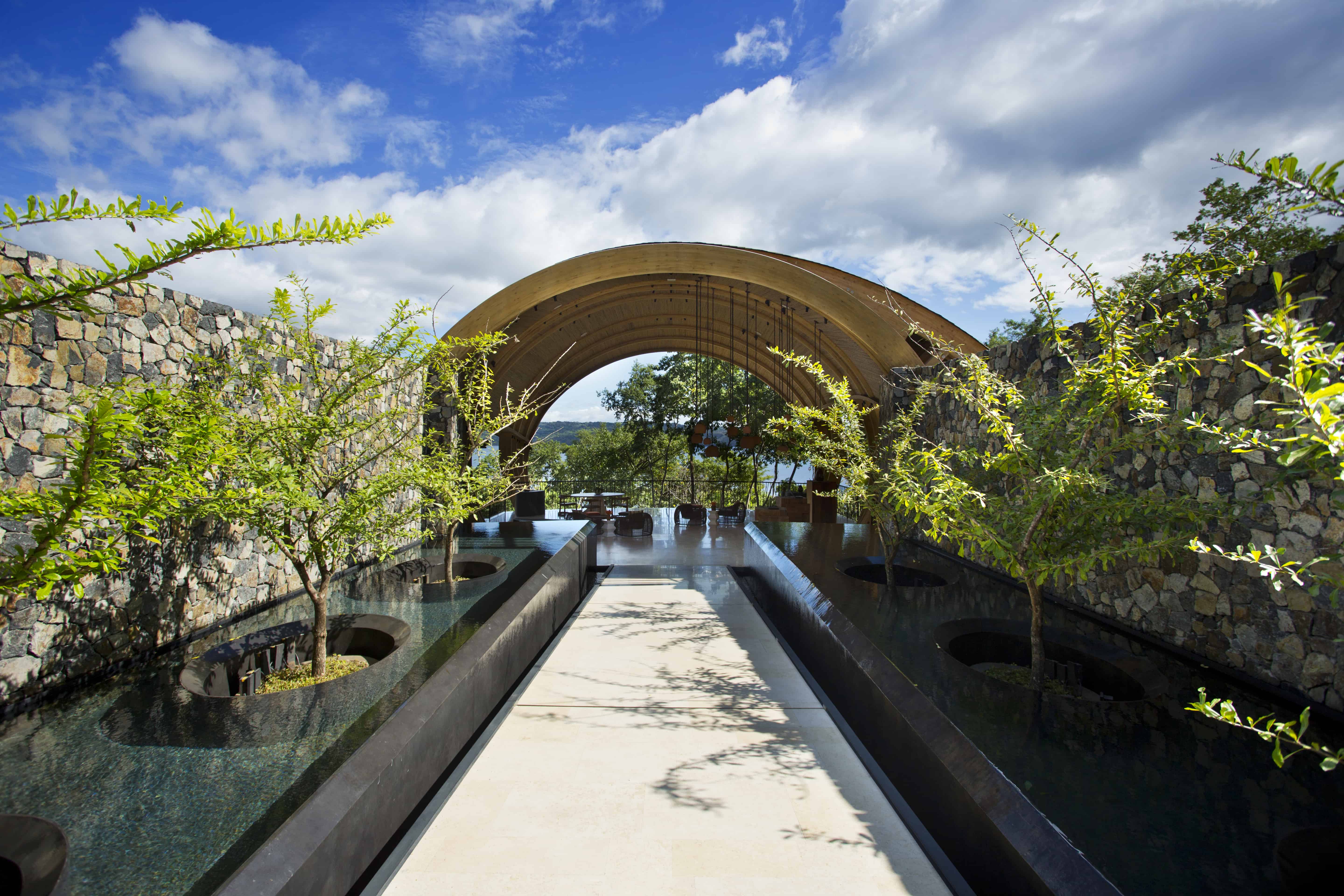 The genesis of the Papagayo Peninsula welcomes the guests in our lounge.  The physical environment of Bahia Culebra is unique on the Pacific coast of Costa Rica. Its geological origin is different from the rest of the country, formed from an oceanic basement in equatorial latitudes. This foundation in its movement toward higher latitudes was affected by the collision with seamounts and marine sedimentation. Once in his current position, volcanic and erosive events shaped the current geomorphology of the bay.

A corridor surrounded by water features represents the sea from which the peninsula rose.  Volcanic stones adorning its walls resemble the geological activity that millions of years ago helped create these lands.

After this journey through history, the curvilinear structure of the lounge recalls the inspiration of architect Ronald Zürcher, based on his collection of shells, cocoons and seeds, which was fun to complete during his visits to the Peninsula when he was a child. 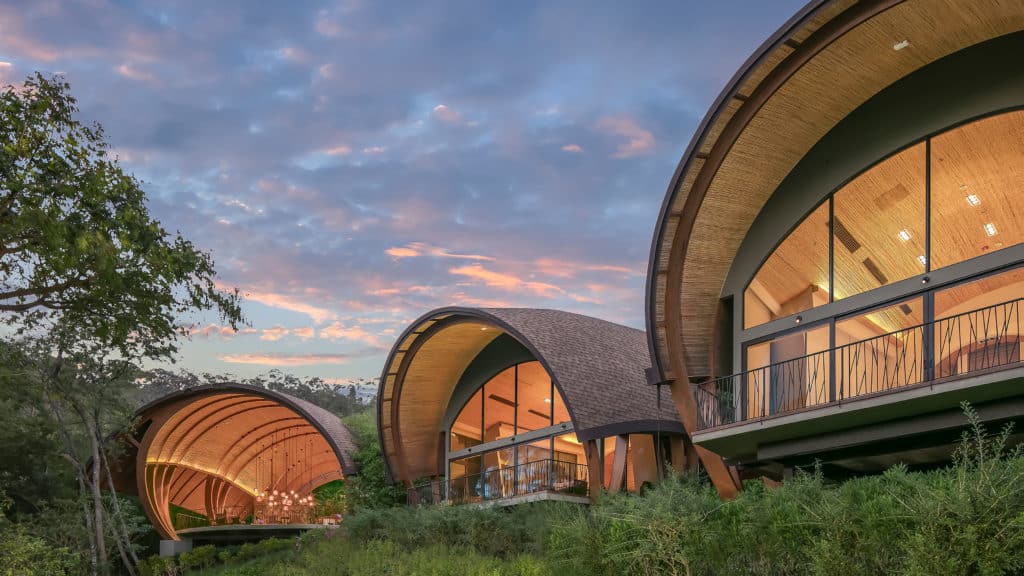 Our studios are a collection of spaces with a unique style.  Inspired by the organic forms of the flora and fauna of the peninsula, their intriguing design is meant to stimulate the senses of guests in new and refreshing ways. The studios resemble a gathering of animals.

“The effect will translate to a feeling of groundedness for Andaz Costa Rica’s guests and staff. Costa Rica is known for its peace-loving attitude, and I felt tapping into Mother Nature’s energy was the best way to connect the resort with the overall vibe of the country,” says Zürcher.

An open space and an open kitchen located as the heart of the studios allow the guests to feel at home. Our Patio is inspired by that familiar spot in every house in Costa Rica, the kitchen, that special place where celebrations are held. 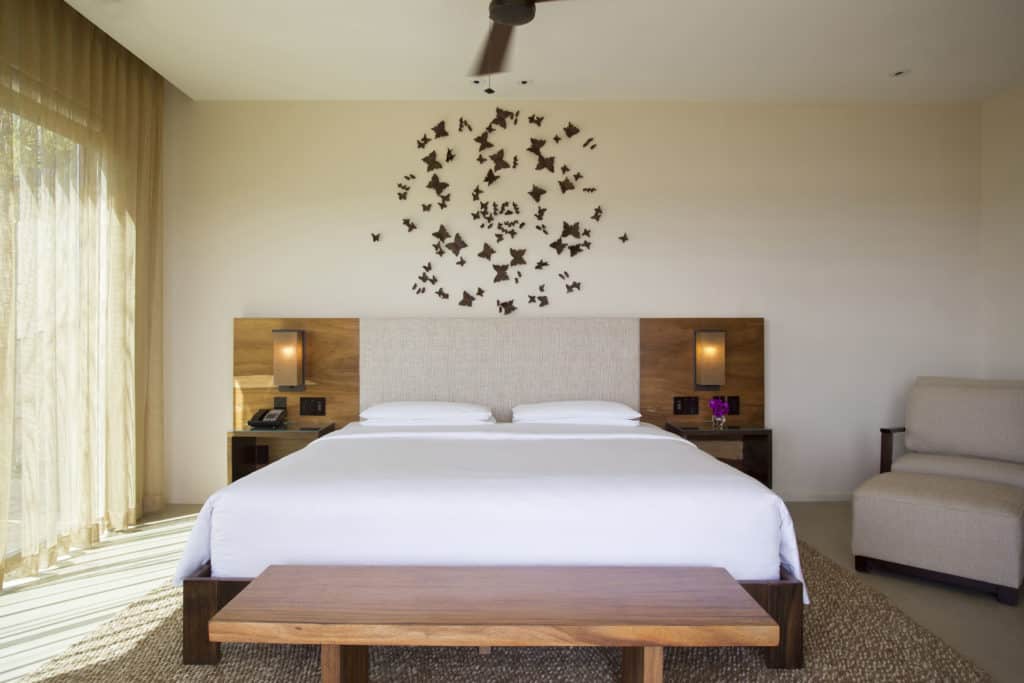 The interior design was in charge of DAS Concepts.  “The guestrooms and suites evoke the World as described in Rima de Vallbona’s “Mystery Stone”: the rooms, simple but thoughtfully designed are conceived as tree houses, open to the sights, sounds, and smells of the surrounding forest” says Francisco Jové, Project Manager.

The materials and furnishing were selected for their natural qualities and their connection to Costa Rica. The design engaged many local artisans and manufacturers.

Art, furniture and accessories were selected to be part of the landscape itself; objects that were either left in these surroundings by nature, or crafted by distant ancestors and later found.

The art in every bedroom was created by a group of women called BosqueMar. This group is comprised of simple housewives, art-lovers, who used art to become design experts and explore other activities aside from household chores.  All the designs use raw materials such as: shells, seeds, stones and all kinds of sea waste. With them, BosqueMar creates flowers, animals, objects or abstract designs.

Other signature furniture created by multi-awarded furniture designers such as Kenneth Cobonpue who features a characteristic lightning piece in our guestrooms, inspired by the Oropendola´s nests, one of the 812 different bird species recorded in Costa Rica. Areas such as the lounge will also display celebrated Cobonpue designs.

As with other aspects of the design, Costa Rican artists such as Cecilia Paredes, Adela Marin Villegas and Karen Clachar feature prominently. 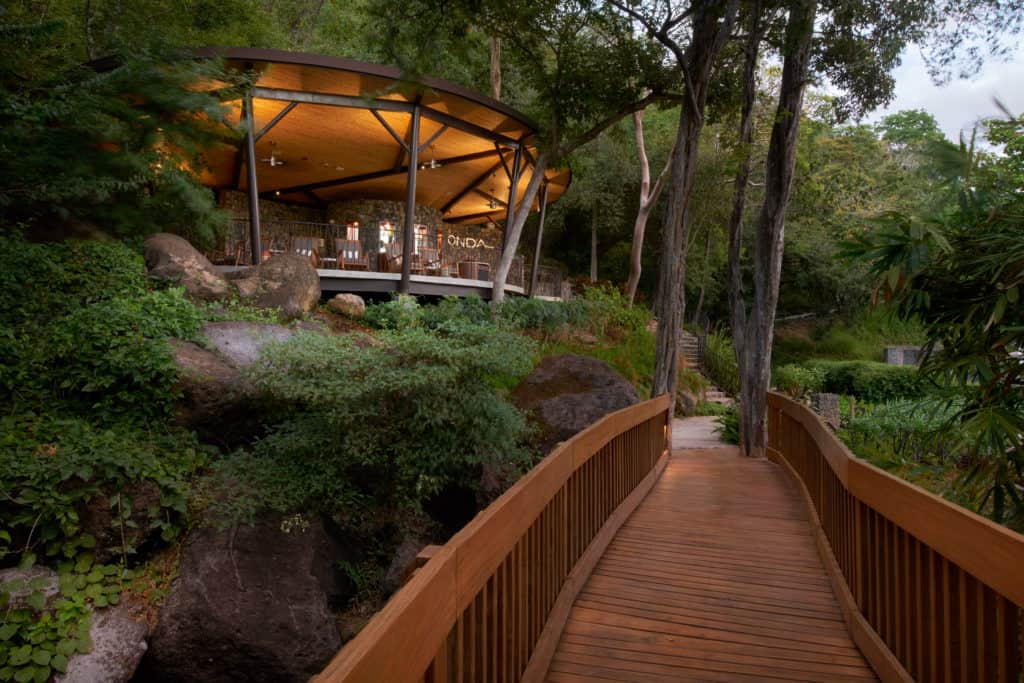 Inspired by the power of water, the spa is a respite of energy, touch and evolution.

The layout of the spa is created to engage the guests into a journey, into a meditative experience that taps into the power of nature.  Treatments at the Onda Spa use true healing power of water as a life source and fuel of evolution.

Each aspect of the spa is designed with guest´s individual preferences in mind.  Guests will choose from a menu all aspects of their treatment. Senses, smells, touches and treatments will address the specific needs, goals and desires.

The treatment rooms are elevated into trees, blending with lush tropical forest.  This full integration with nature allows a reconnection with your inner essence.

Culture is part of the spa too: treatments very unique as the Gallo Pinto, a body scrub based on the famous Costa Rican dish, using rice cream and crushed beans will surprise all visitors, allowing the nutrients of these typical ingredients leave your skin totally refreshed. 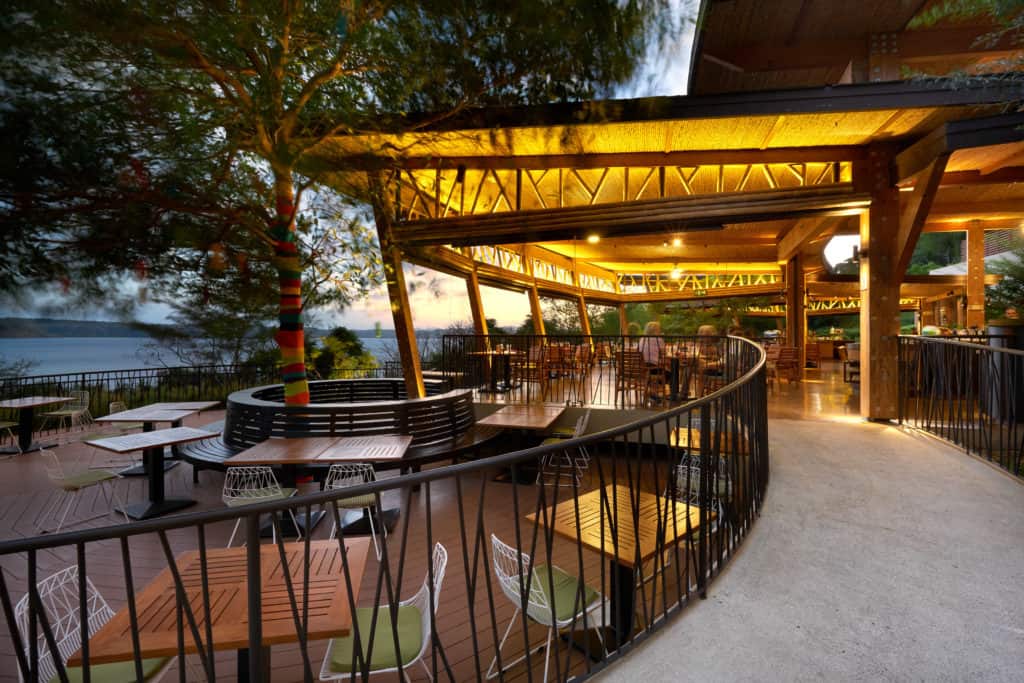 Zürcher tells the story: “While walking the site studying the climate, the topography conditions and views, I saw a lot of “Artists Bracket mushrooms”, those that usually grow on falling trees and look like half-moon platforms clustered in different sizes and elevations.  Immediately I visualized the Restaurant, its form and function. The log would be the kitchen and the different mushrooms would be the individual sitting areas.”

A lively market-style dining environment with a selection of small cooking stations welcomes the guests. The magnificent views of Culebra Bay, craft that special event feeling every minute.

The family pool surrounds the restaurant. Years ago, rivers used to play an important part of the family reunions in Costa Rica. During the weekend or holidays, families used to walk out to a nearby river to spend the day, have fun jumping into the river, preparing picnics and enjoying quality time together.

In the heart of the restaurant, an open terrace surrounds a magnificent tree.  This tree reminds us of the native people who used to live in the Peninsula, the Chorotegas.  This ancient culture used to seat around a tree to enjoy their meals and feasts overlooking the amazing views of what we call today: Culebra Bay.

The restaurant has the name of one of the most important rivers in the area.  The Rio Bongo is one of the biggest rivers on the Nicoya Peninsula and forms the border between the provinces of Guanacaste and Puntarenas.

The difference in the way we write Bhongo is attributed to the mushrooms that inspired the layout. In addition, “hongo” means mushroom in Spanish, which allows us telling both stories using just one name.

Another important part of our culture is reflected in this magnificent restaurant: our coffee. 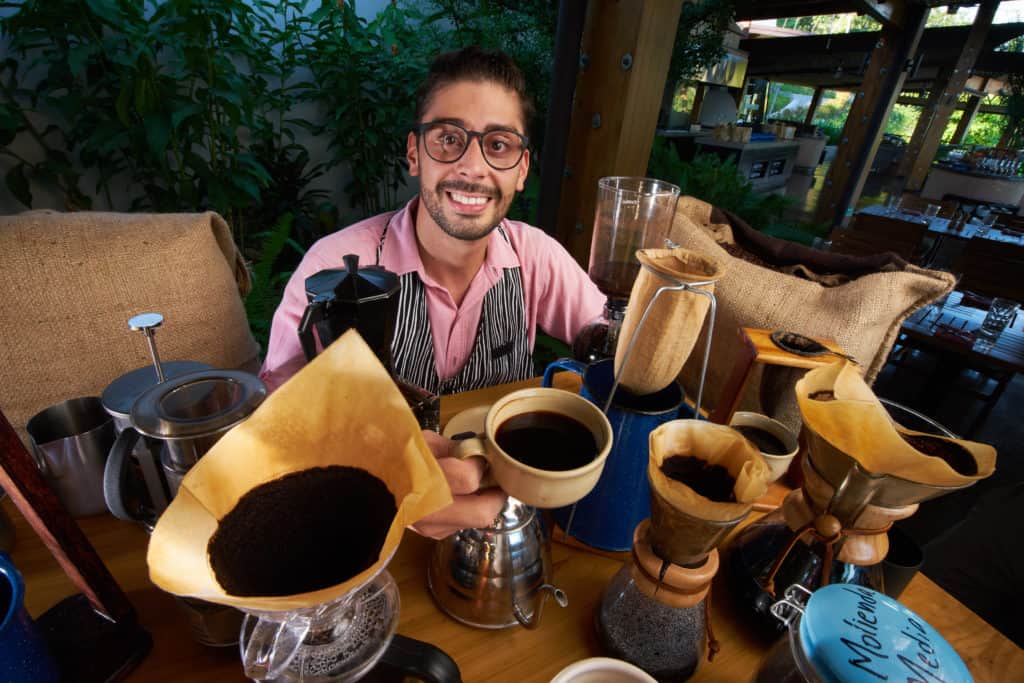 Coffee production in the country began in 1779 in the Meseta Central which had ideal soil and climate conditions for coffee plantations.

In 1832, Costa Rica, began exporting coffee to Chile where it was re-bagged and shipped to England under the brand of “Café Chileno de Valparaíso.”. In 1843 a shipment was sent directly to the United Kingdom by William Le Lacheur Lyon, captain of the English ship, The Monarch, who had seen the potential of directly cooperating with the Costa Ricans. He sent several hundred-pound bags and following this, the British developed an interest in the country; they invested heavily in the Costa Rican coffee industry, becoming the principal customer for exports until World War II. Growers and traders of the coffee industry transformed the Costa Rican economy and contributed to modernization in the country, which provided funding for young aspiring academics to study in Europe. The revenue generated by the coffee industry in Costa Rica funded the first railroads linking the country to the Atlantic Coast in 1890, the “Ferrocarril al Atlántico”. The National Theater itself in San José is a product of the first coffee farmers of the country.

Our coffee shop will offer a special and unique Andaz blend served by our own Barista, Ezequiel Ubaldo. Also, the guest will have the possibility to taste an array of coffee types, one different every morning. 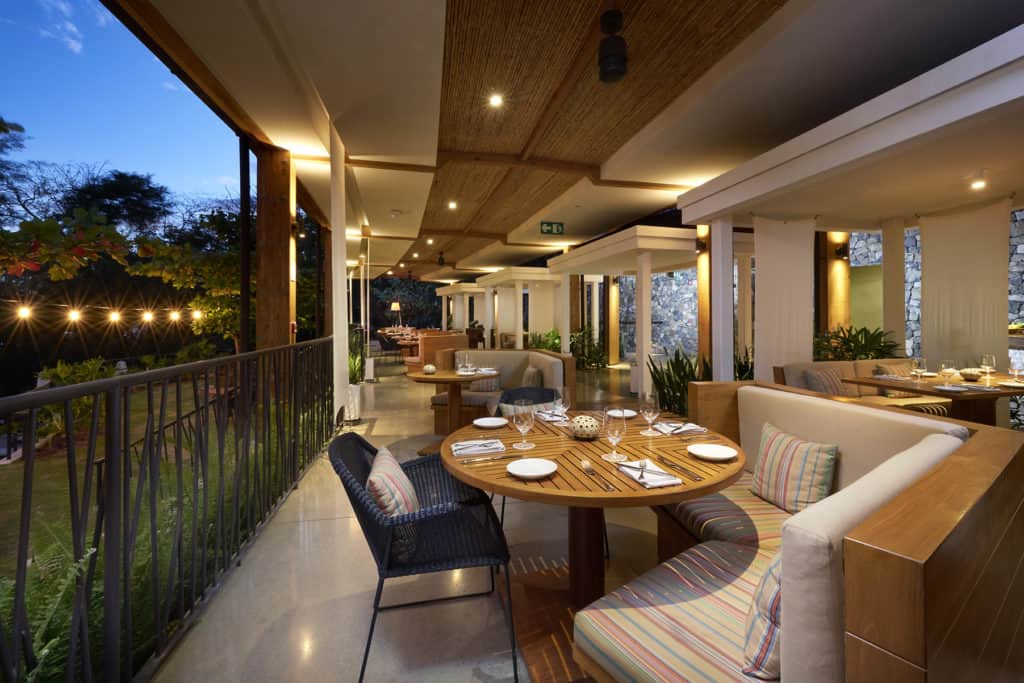 Fishermen are key in the culture of the area.  Guanacaste has more than 400 miles of coastline.  Hundreds of families dedicate their lives to the sea.  Our signature restaurant is a reflection of those men and women who venture very early every day to reap the fruits of the sea.

Ostra has three live culinary stations, allowing guests to sample delicious specialties that our chef is preparing at that exact moment.  These stations and the chefs community table reflects this local culture, where people gather around fishermen after a long day at sea, with a special feast of seafood prepared and enjoyed right there on the beach. 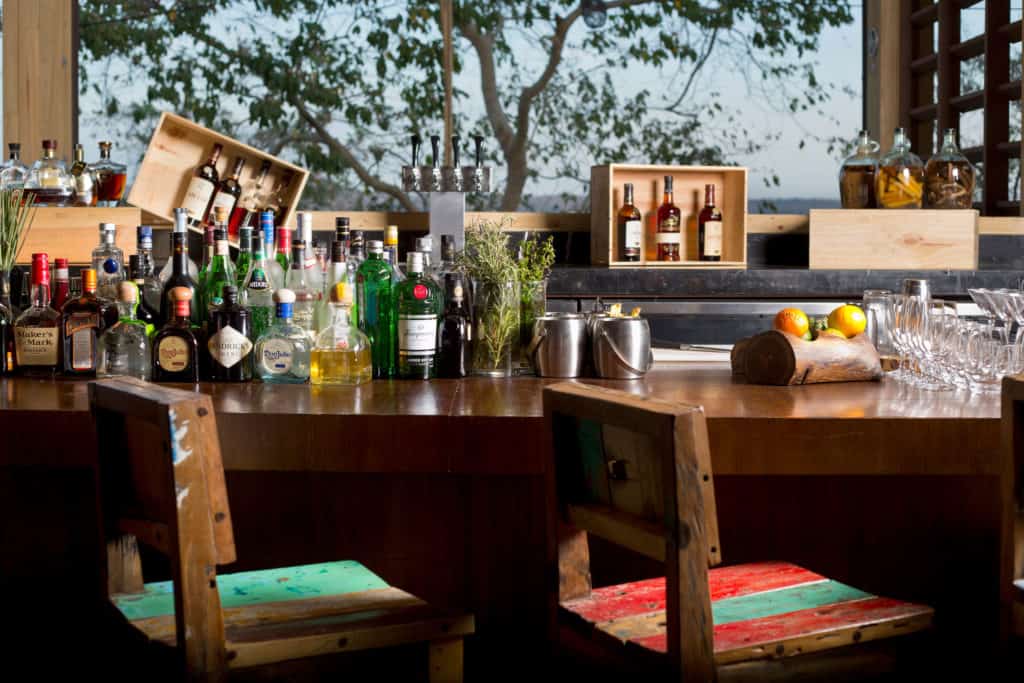 All towns in Costa Rica have a similarity: the city-center has a church, a park in front and in one of the corners (or each one) a “bar”, which is the neighborhood place where everybody meets to relax, have a good time, and catch up with their neighbor and friend.

Our bar Chao Pescao is inspired in this Costa Rican typical bar, where latin culture is an important part of this place too, with live latin music to set the mood.

Don´t forget the typical “boca” a small plate to share or join your cocktail or beer.